Gundalia Under Fire is the 17th episode of Bakugan: Mechtanium Surge. It aired on June 12, 2011.

Before the episode begins with the Battle Brawlers going through a Dimension Portal, to get to Gundalia, Dan goes with the other Brawlers because this fight involves him too. Once they arrive, they arrive at the city lines and see a desolate land which used to have homes. Later, two Gundalian guards confront them. Marucho says they are from Earth and they are the Battle Brawlers, Paige says that she is a Gundalian and Rafe says that he is a Castle Knight, but the guards don't believe them. Then, Ren arrives and says they are his friends. They find out he is now the leader of the Gundalian Forces. Ren then brings them to a secret hideout.

When they arrive there, they receive a message from Nurzak, who has become the first Prime Minister of Gundalia. He welcomes the Brawlers and he is happy to see them back. Then he asks if Paige has been a good student and she concurs, which delights him. Then, Nurzak explain how a castle had emerged from underground out of nowhere, and an evil person called Mag Mel, with his brutish Bakugan, Razenoid, started it all. Then, Fabia Sheen appears on the screen in her Human Form and the Brawlers seem happy to see her once again. Rafe bows down as he reveals to Dan Kuso and the brawlers that she became the Queen while the former Queen (Serena Sheen, became the Ambassador of Gundalia and Neathia, surprising the Brawlers. Nurzak then says that he doesn't know why they came and attacked Gundalia so they had to fight and Queen Fabia said that the Castle Knights are coming to help the Gundalians in their fight against Mag Mel and Razenoid. Prime Minister Nurzak and Queen Fabia then leave.

Ren then tells them that Chaos Bakugan are probably going to the center of Gundalia, where the Royal Palace is. Everyone then agrees with Ren but then Dan wants to help because he has a connection with Mag Mel and Razenoid however, Marucho tries to get Dan to sit this one out because of what happened before, and they end up arguing. Then, Ren asks if he should know anything about them fighting but they don't say that it's nothing. Later, Ren shows the Brawlers a map of the city lines but Dan feels a vision who shows Mag Mel with Razenoid and the army of Chaos Bakugan going North through a place called Dalia's Valley. Dan then says that Mag Mel and Razenoid are going North through Dalia's Valley. Ren knows that the Valley and it goes straight to the Royale Palace. Ren then asks Dan how he knows this and reveals to Ren and the Gundalian Soldiers that he is linked with Mag Mel and Razenoid. The Gundalian Soldiers don't trust Dan because he has a link with Mag Mel but dan says that he can be trusted and ren assures with a little bit of doubt. Marucho then devises and prepares a plan for an ambush.

At the valley, the group waits for Mag Mel to arrive and Dan experience some pain in his head. However, they are the ones to get attacked by surprise from the sky. Rafe decides to give the BakuNano, Sonicanon to Dan and the battle begins with all the Brawlers using BakuNano and as they and Ren attacks, Razenoid rises from the ground. They are stunned as Mag Mel arrives revealing that he can see visions of Dan too, so he knew about the attack. He attacks and eliminates all except for Dan, who begins to charge at Mag Mel but both of them hear a high pitch sound. Mag Mel believes their psychic connection creates high frequencies when they are too close. They both summon their Mechtogan, each with their own battle phrase. They and their Bakugan fight.

After they fight, the result of an explosion leads to Dan losing. Mag Mel walks over to get the gate and key but is attacked by Neathian forces lead by Captain Elright, Aranaut on Rapilator, and an army of Haos Raptorix. Mag Mel and the Brawlers leave, but not before Marucho hears Mag Mel mention the "Gate" and the "Key".

The Gundalian Soldiers begin to doubt Dan Kuso because of his link with Mag Mel and Razenoid. Ren assures them that he is not spy for Mag Mel but he has his own doubts. Dan is angry that Mag Mel used him and Dan punches a wall, while Rafe discusses security upgrades because of the connection. At the end, Marucho looks at Dan with a worried look. 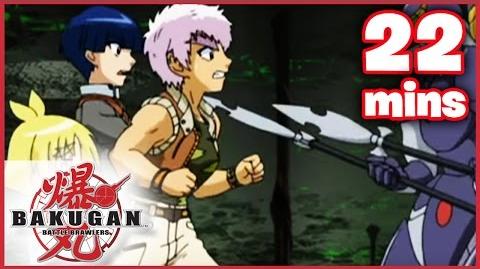 Retrieved from "https://bakugan.fandom.com/wiki/Gundalia_Under_Fire?oldid=762310"
Community content is available under CC-BY-SA unless otherwise noted.