The Curtain Rises for the Tavanel Cup

Shadow Sanjushi's Leader, Karashina, becomes the first to experience the might of this new and very powerful adversary.

A two-colored Bakugan slowly pushes Karashina's Darkus Nata Nagina out of the Gate Card to the point that it didn't only knocked out the standing Bakugan but also its brawler. It also resulted into a violent explosion which grabbed everyone's attention.

Karashina commented that he didn't saw it coming but nonetheless, he went back on his feet and gazed upon his opponent's Bakugan. This new opponent,a white-haired boy, called his Bakugan as "Go Garyu" as he playfully declared that he captured one Gate Card. Karashina may be infuriated yet he is far from giving up.

In the following turn, Karashina has his Killer Volca standing in the Battlefield and his opponent has War Cry. Karashina shoots Darkus Nata Nagina while the white-haired boy shoots Go Garyu. The two Bakugan clashed in the middle of the battlefield for a short while until Nata Nagina is fended off. The raging Go Garyu went all the way to Killer Volca's Gate Card and as it drives out the latter; Master Shimo comments that the strength of the shot plays a very vital role in the game especially when knocking out opposing Bakugan off the Gate Card.  Killer Volca was eventually knocked out but Go Garyu is still going all the way to the edge of the Gate Card. Thanks to its claws which held on to the edge of the Gate Card, the round was ruled Critical K.O. in favor of Go Garyu. The white-haired boy, well aware of the strength of his shot, called it a close call as he declared that it's Last one for him.

Karashina felt that he is losing morale so he went for desperate measures. He invoked his trademark technique "Ninja Art Poisonous Insult." This surprised his opponent but since Karashina knew nothing of the former, he directed his insult on Hono Moetaro instead: Moetaro is a 31-year-old man who got dumped 31 times. As it was meant to be a really embarrassing secret; Karashina's words pierced Moetaro right in the heart, knocking him down as well. The white-haired boy just stared curiously at the effects of the Poisonous Insult while Karashina himself felt awkward that the man in red took it way too seriously.

The battle resumes after a while in which Moetaro got back up. Karashina shoots and stands his Guardian Bakugan, Borg Mahisas; while his opponent shoots Kal Lukan.

In the next turn, Karashina shoots Killer Volca while his opponent uses Go Garyu. Moetaro foresaw that the white-haired boy whose named Nivil, is aiming to inflict Critical K.O. on Borg Mahisas but Karashina intended his Killer Volca to prevent it from happening. Tatsuma feared that the results will be the same before but on a possibly more devastating scale. Master Shimo disagreed as Karashina's angle of shot and launching strength are different. Go Garyu reached Borg Mahisas' Gate Card, slowly driving the latter out. Karashina called it as a futile attempt as he is confident that his Borg Mahisas has a special feature ("Shock Regulator") which transfers the direction of the opponent's impact. However, Go Garyu's MG Mark finally hit the Gate Card and it popped out. Go Garyu's metal horn hits Borg Mahisas' chin and Nivil commands "BakuTech Go Horn." Borg Mahisas was unable to absorb the impact of Go Garyu's upward attack so it was eventually trashed out of the Battlefield. Go Garyu was able to clamp its claws at the edge of the Gate Card so it was ruled as Critical K.O. in its favor. Moetaro declares that Nivil wins the brawl. Nivil cheers while Karashina felt a sense of self-loathing with his crushing defeat.

In the hallways, Harubaru and Raichi were walking off when Nivil approached them. Nivil remarked that he has not seen the two for a long time and congratulated them for their greatly-improved skills. Raichi and Harubaru were both puzzled by what Nivil just said. Nivil concluded that they might have forgotten about him already so he re-introduced himself. Harubaru thought for a while on who Nivil might be. Nivil breaks it in for him, saying that he once fought against them. Still, Harubaru tried to remember yet Nivil is still not ringing a bell for him. In order not to embarrass Nivil, Harubaru just said that he doesn't remember Nivil much but he certainly has not forgotten about him. Nivil certainly felt happy about it while Harubaru just played along. Raichi just stared in awe and suspicion.

The beginning of the brawl which was skipped in the previous episode is shown. 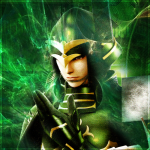 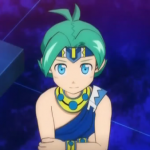