Gillator is an ancient Bakugan who is accidently awoken from hibernation. Gillator is often seen as a bit of a curmudgeon. Despite his gruff exterior, deep down he’s a caring, loyal and dedicated Baku-partner.

Gillator was found by the Awesome Brawlers when he awoke from a spherical stone where he had slept since ancient times. After being awakened by Dan accidentally droping him on the ground but drops him on a Bakucore, he transforms and rises to larger mode. He questions where he is and the awesome brawlers explained that this is Earth. When he was first seen, he was rude to the other factions but later realizes his mistake.

Gillator appeared but still in the process of recovery. 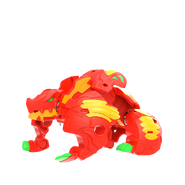