Genesis is the 29th episode of Bakugan: Gundalian Invaders. It aired on November 6, 2010.

Dan is upset that his friend Jake is still brainwashed by the Gundalians and used him as an evil soldier of his soldiers. Now, he's determined to go there and rescue him. The other Brawlers decide to come with him, but Serena Sheen forbids them from going as it is too dangerous. Fabia sends her Aranaut away to check on Linus, then discusses with the Brawlers about how she went to Gundalia by herself and agrees with Serena that the risk is too great. Suddenly, Drago is called by Dragonoid Colossus. Then, Linus Claude comes back and offers them lunch but just as Dan starts to eat, he's suddenly then teleported away.

He ends up in a strange place where he meets up with Nurzak and Mason. They explain that he is in between dimensions and the only way for him to escape is to defeat Dragonoid Colossus as a test. Should he fail, Dharak will be given the same test as Drago and Dharak are the only Bakugan powerful enough to be worthy of wielding the Sacred Orb. Dan accepts and begins the battle. Drago struggles to defeat Dragonoid Colossus, but they eventually win by utilizing Explosix and Jakalier. After the battle, Dragonoid Colossus explains that all of the Bakugan are descended from two original Bakugan: Dragonoid (who was a Blitz Dragonoid) and Dharaknoid (who was a Phantom Dharak). Each of the other Bakugan contain part of their DNA but only Drago and Dharak, direct descendants of these original Bakugan, contain the Ultimate Warrior Gene. Therefore, only Drago is the only Bakugan capable to defeat Dharak. With that Dragonoid Colossus rewards, Drago could evolving him into Blitz Dragonoid and returns him to Neathia.

Upon his return, the other Brawlers meet up with him and ask him where he went, but are even more shocked that Dragonoid Colossus, Nurzak and Mason Brown are with him as well. Dan explains what happened and mentioned that he didn't have the heart to leave them back in between dimensions. Fabia is reluctant to trust them as usual, but Nurzak explains his ordeal with Emperor Barodius and that he is more loyal to the Sacred Orb than him. Mason decides to join them because the other Gundalians soldiers would simply try to get rid of him again and transforms back into his human disguise. Princess Fabia decides to trust them for now. With that, Dragonoid Colossus offers to take the seven of them to Gundalia to rescue Jake. 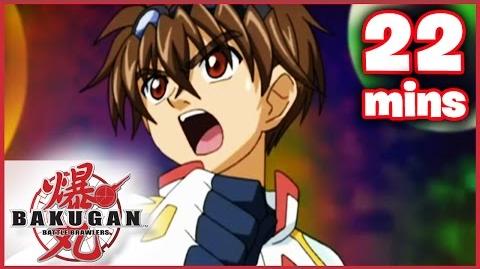