Dan Kuso, Runo Misaki, Mira Fermin, and Baron Leltoy make it to Earth, but pick up some unwanted visitors, embodied in Spectra Phantom, Gus Grav, and Lync Volan. Marucho Marukura manages to defeat Shadow Prove and he, Shun Kazami and Ace Grit decide to take out the Beta City controller to pass the time. Before Spectra takes his leave, he grabs Runo as a hostage, and offers Dan an ultimatum: join the Vexos or risk Runo's safety. Dan, Baron, Mira and Julie Makimoto split up, and Dan and Julie run into Spectra and Runo. Mira chases after Gus to find Spectra, and Baron fights Lync. Spectra reveals that he is actually against Prince Hydron's rule and that he wants to team up with Dan to take him down and in a show of good will, releases Runo. Mira's suspicion of Spectra being Keith Fermin (her missing brother) only rise, as she believes that he infiltrated the Vexos to free the Bakugan. After Baron defeats Lync, it is revealed that Spectra and Gus only want to take down Hydron, so that Spectra can become the ruler of the Vestals. Meanwhile, Dan refuses to believe Spectra's intentions and before anything happens, Alice Gehabich warps in using Masquerade's warp card. She takes Spectra and Gus (and Dan) back to the lab, where Doctor Michael sends the villains back to New Vestroia. Unfortunately, the transporter must be repaired before another trip can be made. So Dan takes his friends to his house for the meantime. Lync crashes in, but refuses Dan's hospitality, but accepts Alice's due to his hunger after their ride leaves. Alice doesn't like him one bit and tells him that when the transporter is repaired, he is "so gone". Before the end, Lync is seen crying after Alice leaves him some food.

Most of the brawl is skipped.

Elfin activates her Change of Attribute, changing into Darkus.

Baron wins this round. 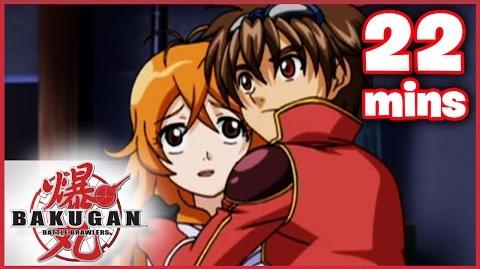 Retrieved from "https://bakugan.fandom.com/wiki/Gate_Crashers?oldid=763607"
Community content is available under CC-BY-SA unless otherwise noted.