He fused with the Infinity Armor to form Garillion Infinity but later, he passed on the power of infinity to Dragonoid X Aurelus as he thought that they could use it to defeat Sabrus and Haavik. He returned to the maze after Dragonoid Infinity defeated Sabrus. 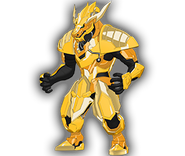 Retrieved from "https://bakugan.fandom.com/wiki/Garillion?oldid=763359"
Community content is available under CC-BY-SA unless otherwise noted.