For the Bakugan in the Battle Brawlers series, see Gargonoid.

Good at cheating, trapping and confusing opponents. He's better at strategy rather than physical fights. Garganoid's strength is fighting in the air, and has a hard time battling on the ground. This merciless Bakugan never accepts a surrender; he fights until the battle is long over. This Bakugan was given to Kurin by AAAnimus. 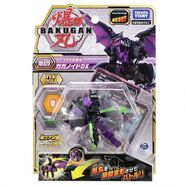