GAME OVER is the 52nd and final episode of Bakugan Battle Brawlers. It aired on November 16, 2008 in English.

The final battle has been set. Silent Naga is squaring off against Infinity Dragonoid, in pursuit of the Infinity Core. And it looks like Naga is about to win as Drago is down for the count. That's when the Brawlers step forward, and launch their Bakugan into the battle. It takes hardly anytime for the Brawlers to win and send Naga to the Doom Dimension once and for all. And in doing so Drago, now has both the Infinity Core and Silent Core inside of him. With the battle over its time for the Brawlers to say good-bye to their Bakugan. They have to return home to Vestroia to restore it to its original form. It's a sad time, but after all is said, Drago leads the Bakugan back home, where he meets up with his long-time love Wavern. And what about the Brawlers? They return home and Dan even gets a date with Runo and on the bench in the background, you can see Joe and Chan Lee.

Some deleted scenes may be vary based on Japanese dub, English dub, and other early versions. The completed scenes comes from Japanese DVD and other country's dub based on DVD. 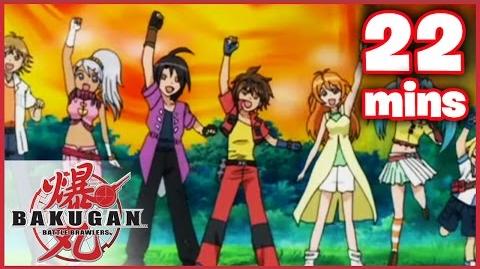