Forgiveness is the 26th episode of Bakugan: Gundalian Invaders. It aired on October 16, 2010.

After the battle with Barodius, the Brawlers repair the damage that has been done. The second shield and the shield generator are completely destroyed, leaving only the third shield remaining. With that, the Brawlers get Captain Elright to transport them back to the Castle. However, Ren gets left behind because the third shield scans everyone's DNA and blocks Gundalians from passing through. Also Fabia doesn't completely trust Ren yet. Fabia still thinks Ren is evil. Queen Serena explains to the rest of the Brawlers that Aranaut used to belong to Fabia's fiancé, Jin, but he lost Aranaut in battle to Kazarina and was killed. Fabia snuck on to Gundalia and rescued Aranaut from Kazarina's lab and the two became partners, but Aranaut lost his memory of the incident and believes that Fabia was always his partner. Therefore, Fabia still does not trust the Gundalians. But Dan convinces her to trust Ren. Marucho ventures into the forest to look for Ren, when he is nearly eaten by a carnivorous plant but Ren saves him. Then Marucho brings food for him but Ren comments that he doesn't deserve his forgiveness. Marucho tries to convince him that he has already been forgiven by the Brawlers but Fabia appears to test him by battling him. If he wins, he gets to stay, but if he loses, he must leave Neathia forever. In the battle, Linehalt manages to hold his own against Aranaut, but is still weak from using his forbidden power and falls. Then Ren decides to use Rubanoid much to the surprise of the other Brawlers. Rubanoid is defeated, but after seeing his commitment to avenge Sid's death, she decides to trust him, so he is made a member of the Castle Knights.

(Note: Gs were not shown in this battle, rather basing them on abilities with known effects.)

Fabia then counters with her Battle Gear Ability Battle Crusher Duke. Due to its activation, Boomix Lock's effect was halved (Aranaut: 600 - 1100 - 1350 Gs). Linehalt gets knocked out.

Fabia sends out her Battle Gear: Battle Crusher and attaches it to Aranaut (Power: 700 - 800 Gs). 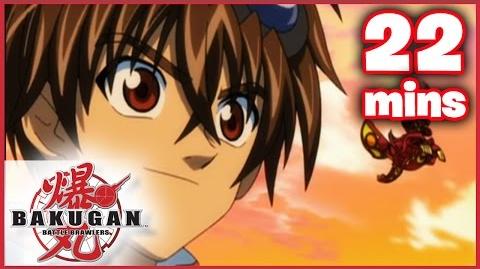