Final Strike is the 34th episode of Bakugan: Gundalian Invaders. It aired on December 11, 2010.

As Ren Krawler and the Neathian's Princess Fabia sneak about on Gundalia, they encounter two guards, not knowing that it was actually Shun Kazami and Marucho Marukura in disguise, who then meet up with Mason Brown. Meanwhile, back at Kazarina's lab, she has finished analyzing Drago's DNA and gives Barodius and an anxious Dharak the good news. Kazarina warns him the transfusion of Dharak's and Drago's DNA would be painful. Gill tells her that she can do whatever she wants with the other Bakugan, but not with Dharak, who then orders him to be quiet and says that he is willing to go through with it regardless of the risks involved. Despite Gill's objections, Barodius silences Gill and tells him not to underestimate Dharak. Kazarina then begins the transfusion and in mere moments, Dharak is evolved into Phantom Dharak by Barodius. Furthermore, it is revealed that Dharak's DNA is no longer purely Gundalian thanks to the transfusion with Drago's DNA, which allows him to attack the third shield protecting Neathia. Meanwhile, in Nurzak's secret lair Mason and the Brawlers discussed about what has to be done. After that Mason decided to look for Nurzak while the rest of the team infiltrate the castle. After Linehalt and Boomix blasted a hole in the castle, Marucho, Shun, and Fabia enter. While they are suddenly ambushed by Gill and Krakix, Ren and Linehalt come just in time to help them. They split up with Ren battling Gill and Shun, Marucho and Fabia in another group. Later they were attacked by Airzel and Strikeflier whom Marucho and Akwimos went up against. Stoica and Lythirus later attack Shun and Hawktor, who both are forced to respond. While Kazarina plans to destroy Dan, it's up to a worried Fabia to rescue him. Meanwhile, Jake starts to snap out from Kazarina's hypnosis. 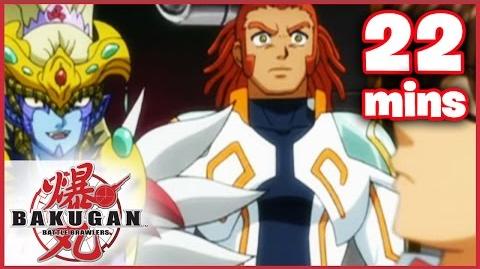