Final Countdown is the 25th episode of Bakugan: New Vestroia. It aired on October 24, 2009.

As the battle between Maxus Dragonoid and Maxus Helios rages on, Mylene interrupts Hydron in his collection room, by dragging him off. She explains that they are leaving New Vestroia. Hydron refuses at first, being afraid to face his father, due to his failure to successfully occupy New Vestroia, but agrees to Mylene's plan to label Spectra as a traitor. Meanwhile, Mira, Marucho and Shun try to activate a machine to reverse the process of Preyas, Gorem, Tigrerra, Hydranoid, and Skyress's petrification, but are unable to determine the numeric code. Dan and Drago take to the skies to battle Spectra and Helios but the power coming from their battle is far too much and they crash into the palace. Mylene prepares for their departure from New Vestroia, but not before tossing out Elico and Brontes, believing that Bakugan with feelings are useless and imperfect fighting machines since Professor Clay has already created many powerful Mechanical Bakugan. Out of a stroke of luck, Elfin discovers the activation code, but with the palace self-destruction under way, it may be too late. 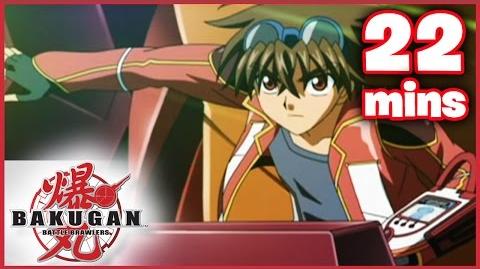