Ferascal is a cat-like Bakugan & the new Guardian Bakugan of Lightning in Bakugan: Geogan Rising.

Ferascal is short-tempered, nasty and loves pulling pranks. It’s a curious pairing – brawling with Lightning. Ferascal is a very focused on her own self-preservation, so she eventually comes to realize the value of cooperating with her pooch partner. Ferascal and Lightning communicate in the same way that Lightning and Howlkor communicate. Ferascal understands Lightning’s barks and will “translate” for the others. Occasionally, Ferascal deliberately “mis-translates” for her own amusement.

Ferascal makes her full debut appearance in the episode The Bakugan of Junk Island.

She also appears in Lia and Fenneca and Lightning and Ferascal. 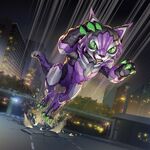