Fenneca is selfish, moody, and feels she doesn’t need any help to win a battle. She reminds Lia more of China Riot than the regal, wise, and nurturing Pegatrix. Unlike with Pegatrix, Lia has to be more of a parent with Fenneca, who, like a petulant teenager, is dismissive and grumpy about everything Lia has to say, testing Lia’s patience to the limit. Eventually, Fenneca learns the hard way that partnering with Lia can help her win but she never loses her saucy attitude.

She makes her full debut in the episode The Bakugan of Junk Island.

She also makes her appearance in Lia and Fenneca. 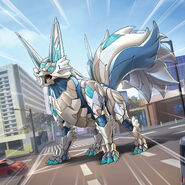