'Fangzor (ファンゾー, Fanzō?) is a cobra-like Bakugan that appears in Bakugan Battle Planet. It is a common Bakugan typically used by villainous characters such as Magnus Black, China Riot, and AAAnimus grunts.

Fangzor likes to torture his opponents ever so slowly. He takes great pleasure in sneaking up on his victims. He has two sets of poison fangs, the most dangerous set being on his body. He must use those very wisely as they can only be used sparingly. 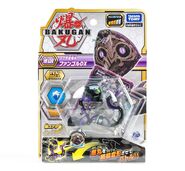