The Resistance is ready to head back to New Vestroia and Dan wants to bring Runo, Julie and Alice along. But Mira suggests that they spend one last day on Earth, for Dan to say goodbye to his parents. Alice uses her transport card and Lync convinces her to take him too, but he really just needs to meet up with Spectra and Gus. As Dan and the others meet Alice at the tower, Apollonir opens a portal to New Vestroia. However, they are ambushed by Spectra, Gus and Lync and to make matters worse, Mira betrays them and heads into the portal after telling them that Spectra is her brother. Dan and the others miss their chance and Apollonir is not strong enough to open another portal, so Alice takes them back to Russia to use her grandfather's transport machine, but because Dr. Michael used the technology in Lync's Gauntlet to repair the machine, those without a Gauntlet, such as Runo, Julie and Alice, are unable to pass through. When Runo lies that she never really wanted to go to New Vestroia and lashes out at Dan telling him to never come back he grabs her hands and says how he's sorry she's not coming, and they gaze into each other's eyes until the machine is ready he slowly lets her hands go. After that heartfelt goodbye with Runo, Dan and Baron, head through the transporter back to New Vestroia. 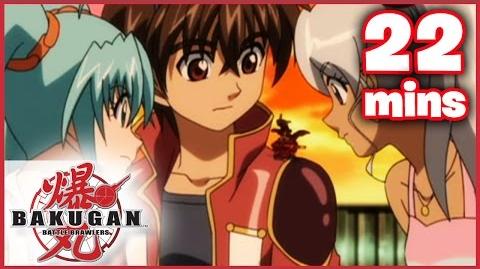