Fall From Grace is the 4th episode of Bakugan: Mechtanium Surge. It aired on March 6, 2011.

Shun and Marucho discover that Dan and Drago are training secretly, and that Drago spawned Zenthon. They then fight alongside Dan against Zenthon and none of their attacks are strong enough to defeat Zenthon's shield. The next day Sellon and Dan have a match but Shun decides to join in to help keep Drago from losing control of his powers again. So Chris from Sellon's team battle alongside her making it a tag-team battle. Drago has difficulties controlling his powers and almost releases Zenthon, but Shun and Taylean prevents this from happening by siphoning off Drago's excess power. Dan and Shun manage to pull out a win but Sellon throws the battle and wins over the audience. Shun confronts her as to why she let them win, to which Sellon makes an offer for Shun to join her team. He however declines since he has doubts about her team.

Difference between the Japanese and English dub 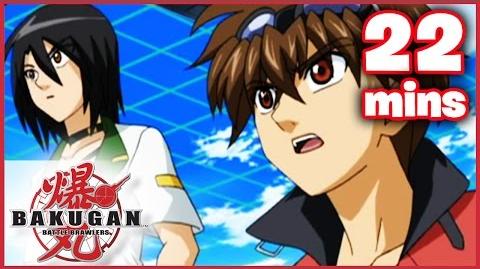