Home on the Run

Brandon McGibbon
Fade Ninja (フェード忍者, Fēdo ninja?) is a ninja-like Bakugan that appears in Bakugan Battle Planet. Used to belong to one of Shun's bodyguards - Toshi, but now passed onto him as one of Shun's new Aquos Bakugan.

Shun acquired this mighty Bakugan from Toshi, also known as the right-hand man of Shun’s father. Like all great Ninjas, his attacks are quiet, fast and precise. His strategy for taking down enemies is surprise. Fade Ninja’s greatest ability is creating mirages of himself, deceiving his opponents into believing they are facing an army. 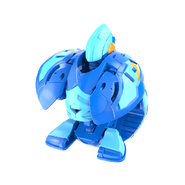