Invasion of the Vestals

Facing Ace (Japanese Version: Synchronicity) is the second episode of Bakugan Battle Brawlers: New Vestroia. It aired on May 16, 2009 on English, and in the Japanese aired on March 9, 2010.

After the battle with Lync and Volt, Dan, Drago and Marucho, go with Mira to the Resistance base. Spectra Phantom and the Vexos have a chat with Hydron where they conform Drago is in New Vestroia. Along the way, Mira reveals that only a few Vestals realize that the Bakugan are intelligent creatures, while the rest of the Vestals have not been told. She reveals that after discovering this for herself, and becoming outraged with her father, for participating in the capturing of the Bakugan, she ran off and created the Bakugan Battle Brawlers Resistance, joining with people who felt the same way as she did. Upon arriving at the base, they meet Baron Leltoy, a major fan of the Bakugan Battle Brawlers and the Six Originals Hero Bakugan. Shortly after, another Brawler from the Resistance named Ace, highly disapproves of Mira bringing humans to aid in their quest to free the Bakugan. Instead, he challenges Dan to a battle and says that if he beats him, he and Marucho can join the Resistance in their quest to save the Bakugan. Dan gets off to a rocky start, but he and Ace are too evenly matched. With one win and one loss each their battle ends, after a period of three hours, in a tie and they become fast friends.

Both Bakugan do a tornado struggle and Drago gets knocked out due to his default power level being lower than Percival's.

Ace wins this round. 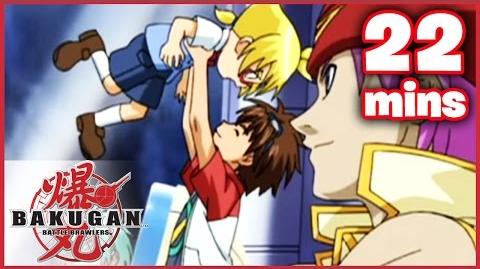