Exposed is the 6th episode of Bakugan: Gundalian Invaders. It aired on June 27, 2010.

Fabia tells Shun her side of the story, which he believes, while he worries that the others have made a big mistake. While Marucho and Ren work hard on an expansion for Bakugan Interspace, another Neathian mole, Jesse Glenn, arrives. Dan heads to the new arena to challenge him, but is stopped by the Fabia who claims that Jesse is not who he claims to be. She steps in to fight Jesse, something that greatly confuses Dan and the others, since they all think that both Jesse and her are Neathians. Ren insists that they do not cheer for either of them, and they should just let their enemies destroy each other. Despite this, Dan, Jake and Marucho cheer for Fabia. Although she puts up a good fight, Fabia loses due to a bug in the field, causing her to cry over her defeat. Shun explains that the only person who could plant an unlikely bug that caused Fabia's defeat was someone familiar with the BI System, someone like Ren, and he denies everything while Jesse flees. Fabia and Shun then expose Ren for lying about how Neathia attacked Gundalia, causing him to run away. Marucho however, refuses to believe these accusations, and rushes off to find Ren to find the truth.

Jesse sends out his Battle Gear Vilantor Gear and equips it to Plitheon. (Plitheon: 900 - 1000 Gs)

Fabia opens her Gate Card (Haos Saver), but it is no use with Vilantor Gear Cyclotron active.

Jesse wins this round. 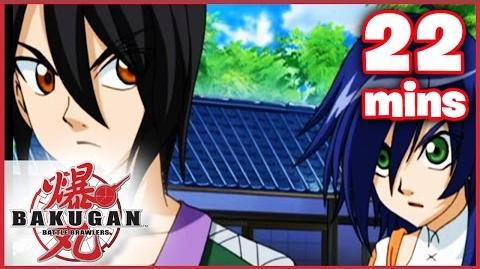