Evil Arrival is the 27th episode in Bakugan: Mechtanium Surge. It aired on September 10, 2011.

A long time has passed since Mag Mel and Razenoid were defeated and Earth, New Vestroia, Vestal, Gundalia, and Neathia were emptied of all the Chaos Bakugan. Everyone has returned home, including Spectra, Gus, Paige, Rafe, Taylean, Trister, Boulderon, Wolfurio, Helios, and Vulcan. As soon as everything turned back to normal, Mira arrived and brought her advanced Vestal technology to aid Marucho and the Marukura Corp into making the Bakugan Research Center, which is now the Bakugan Battle Brawlers Headquarters. Now that the Interspace is gone, the Marukura Corp and the Vestal scientists were able to create a new home for brawling in replacement of Bakugan Interspace, known as Bakugan City. Once word got out about this place, all Bakugan from New Vestroia partnered up with humans and are now living there. That's not all, the Brawlers are still #1 with their new partners, like the rockin' hardcore ninja tag team of Shun and Ventus Jaakor. Next is the awesome smack talking but smart tag team of Marucho and Aquos Radizen. Finally, we still got the ultimate brawlers, Dan and Pyrus Fusion Dragonoid. The first season of the Neo Bakugan City Tournament is about to end with the top 4 brawlers, Dan, Shun, Marucho, and Gunz Lazar battle it out. Julie Makimoto is also back as the new announcer for battles, including her rule (to avoid danger) of no Mechtogan during battles. Marucho, although making a top-notch scientific plan to take down Gunz and his Haos Reptak, lose the battle. Next up is the long-awaited brawl between Dan and Shun, with Dan mimicking Shun and Jaakor's ninja style of brawling to win the match. After the battle, Shun questions how did Dan get those ninja skills. Dan replies, saying from TV, as Shun smiles. The final round is Dan VS Gunz in the finals, and who will win?

Meanwhile, in the now incredibly empty Doom Dimension, Fury is shown being betrayed by his Mechtogan Coredegon, who then kills him. Coredegon, along with Aquos Mandibor, Pyrus Slycerak, and Haos Exostriker are being rogue Mechtogan and want to make all Bakugan extinct. 8 Rogue Bakugan known as the Nonet Bakugan refuse to be betrayed by the ones they created but warn them not to go to Earth because of the threat that is the Battle Brawlers. Of course, the stubborn Mechtogan ignore this warning and head out anyway, with Ventus Worton (called Professor Worton) left afraid of the outcome. During the brawl between Dan and Gunz, Drago and Reptak are battling in hand-to-hand combat until Fusion Dragonoid's and Reptak's attack collides. Coredegon and the other Mechtogan arrived and Coredegon plans to destroy every Bakugan in the stadium, which causes massive chaos, with Mira and Julie escorting everyone out. Dan, Shun, and Marucho then battle the four Mechtogan off, but they are all defeated easily when all 4 of the Mechtogan combine to form the mighty Mechtavius Destroyer. Julie, Mira, and other spectators are seen cheering for Dan, who then uses his powers with Drago to spawn Dragonoid Destroyer. Dragonoid Destroyer is known to be a Mechtogan Destroyer, and he then speaks to Dan and Drago telling them to join him in his fight against the Mechtogan. The true Destroyer Showdown commences and the Mechtogan seem to be winning until Dragonoid Destroyer shows his true strength all blasts all four of them back to the Doom Dimension, with all of them cursing Dan and the others, After Coredegon escapes, Mira and Julie high-five, the audience cheers, but Marucho worries about whether or not these Mechtogan will return, a mysterious masked man named Wiseman is seen staring and laughing at the outcome of the battle. 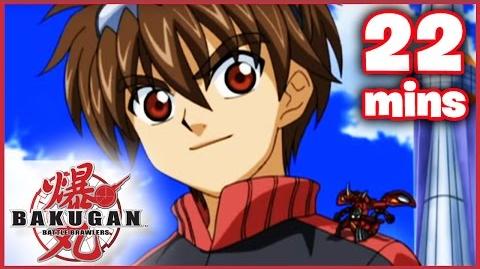