Escape From Darkness is the 10th episode of Bakugan: Gundalian Invaders. It aired on July 25, 2010.

With Ren Krawler still in control of Bakugan Interspace, Marucho Marukura quickly comes up with a plan to regain his creation. Emperor Barodius calls Ren and suspects that he may betray them due to his desire to not battle with his former friends. Ren assures him of his loyalty, while Linehalt attempts to get the truth from his friend. Ren reminds him of the story behind their loyalty to Barodius: there were many ancient Bakugan with the Forbidden Power, but they were sealed underground. Eventually, their numbers dwindled to just Linehalt. Ren was the last descendant of the Protectors of the Dark Bakugan and was assigned to take care of Linehalt. Over the years, they bonded and dreamed of escaping their underground prison, until the Emperor recruited them to lead the invasion team to Earth. Meanwhile, Marucho and Princess Fabia infiltrate BI. Marucho tries to regain control, while Fabia and an Avatar Marucho battle against Lena Isis and Zenet Surrow. The Avatar is quickly taken out as Ren discovers Marucho's invasion. Fabia is defeated and Zenet and Lena decide to take her back as a prisoner and something that will give them an edge against Neathia. However, Marucho arrives in time to get her out. Though their mission was unsuccessful, Marucho reveals he installed a back door to better access Bakugan Interspace without alerting Ren and his team.

Lena and Zenet win this round. 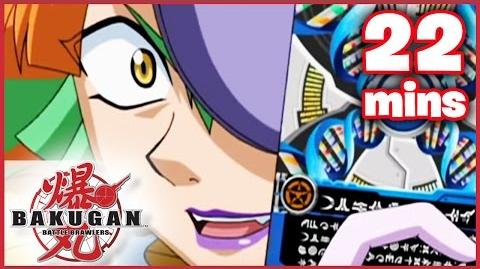