Enemy Infiltration is the 39th episode of Bakugan: Mechtanium Surge. It aired on December 3, 2011.

The episode begins with Skytruss and Orbeum investigating on Wisemans hideout, having been transported there by Shun Kazami when he threw them two episodes earlier. They then discover a secret room after wandering around for a while. Meanwhile, Wiseman reveals to the Nonets that the Mechtogan are now fully resurrected except for Coredegon; as Wiseman states he is saving him for last. As Skytruss and Orbeum send out a message to the Brawlers about Wiseman's hideout, Balista vows to find out Wiseman's true identity. Meanwhile, the Brawlers learn of Wiseman's hideout and they head there to take down Wiseman for good.

Back at Wiseman's hideout, Skytruss and Orbeum face off against Stronk and Spatterix, but are eventually defeated and recovered by Dan, Marucho, and Shun. The Mechtogan except Coredegon appear and a huge battle ensues. Meanwhile, Balista tries to awaken Gunz Lazar from his prison, but is unsuccessful. Wiseman then appears and prepares to punish Balista for "putting his nose in other people's business". He grabs Balista and throws him to get him into Bakugan form. Balista demands Wiseman to reveal his true identity. Wiseman does so and kills Balista in the process. Outside the cave, the Brawlers combine their Bakugan, in hopes of defeating the Mechtogan, but are overpowered and sent off a cliff. The episode then ends with Gunz Lazar finally awakening. 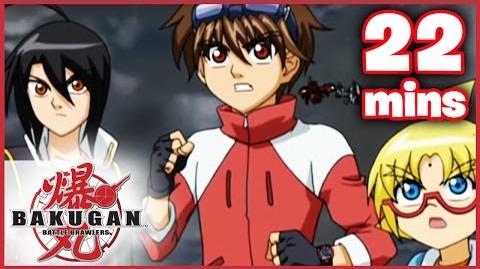