Ebony is a street cat who wants servants and calls her a queen in Bakugan: Armored Alliance. She's an Ventus brawlers, and her Guardian Bakugan is Ryerazu.

In the episode The Mascot Cat!, Ebony was reduced to being a street cat yet again, until the owner of a sushi restaurant picked her up and made her the mascot of the new sushi restaurant next to the steakhouse. For a time, things have gone well for her, until Ferascal sees this as a ruse for Ebony to drive the steakhouse out of business. After brawling against Lightning, she admits defeat and walks away, hoping the best for Lightning, showing some form of begrudging respect. 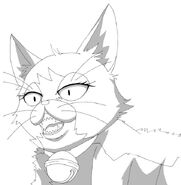 Retrieved from "https://bakugan.fandom.com/wiki/Ebony?oldid=764826"
Community content is available under CC-BY-SA unless otherwise noted.