For the Bakugan type in the Battle Brawlers series, see Dragonoid.

Origin of the Species Part 1

Dragonoid (ドラゴノイド, Doragonoido?) (Drago for short) is a dragon Bakugan that appears in Bakugan: Battle Planet, Bakugan: Armored Alliance, and Bakugan: Geogan Rising. He is the Guardian Bakugan of Dan Kouzo. His real name is Maximus. An Aquos Dragonoid appeared controlled by Dan's doppelganger.

Noble and true… and maybe a little overly committed to achieving greatness, Dragonoid is in many ways King of all Bakugan. Or on the pathway to becoming. Right now, he’s a prince still earning his wings. Drago is extremely selective about his human partner, and is happy to have chosen Dan… most of the time. He is a passionate fighter whose style is a perfect match for Dan’s instinctilight showforce approach.

Dragonoid personality is very simliar to his partner, Dan Kouzo, he is very impatient, reckless, somewhat over-confident and cranky in battle. However, he is a lot wiser than his partner and is super competitive as a fighter.

It was the night of the Great Collision when the Bakugan awakened, and Dan, Wynton, Lia, and Lightning were there to watch the lightshow, trying to prove if it ever actually happened. To Dan Kouzo's surprise, he found Drago there and learned how to get him out of Ball Form. Initially, Dan was freaked from Drago's transformation, but the two made a pact to become great friends and become the best Bakugan Brawlers ever. Early in, Drago was always pumped and looking for a chance to battle other Bakugan every chance he got, but soon learned that in order to get better, he needed to practice his abilities and become stronger. Dan and Drago rarely battled alone in the first season, usually accompanied by Trox, Gorthion, Howlkor, or Hydorous.

In Drago Returns while Dan and the others are headed to school they see Chad and Chester who threaten the Awesome Brawlers to admit that Chad and Chester's channel is better. Since the Awesome Brawlers have no bakugan they can not defend themselves. And to make things worse, the drome starts to break anytime Crakanoid (Chad's new Bakugan ) uses an attack on it. Then Drago comes out of an unstable mobile gate and defeats Crakanoid. After that Crakanoid disappears. In The Bakugan of Junk Island, Drago tells the brawlers about how the other Bakugan used the remains of their energy to heal Drago. Drago also says that when he was coming to Earth through the gate, the gate became unstable but luckily he was able to make it to Earth. Then later on in the episode Drago helps distract 4 Bakugan that were attacking the Awesome Brawlers. In A Former Thief and a Laid Back Dude Drago watches Wynton and Ajit battling Strata. In Magnus Returns Drago and Dan battle Strata to protect Emily. In Gregorius Reed Arrives Dan and Drago battle Strata.

The Core Pyrus Dragonoid has 200 B-Power and comes in a single pack with 2 BakuCores, a booster pack with two other Bakugan and 6 BakuCores, & also a case with 2 BakuCores. An Aquos version comes in the Bakugan: Battle Planet arena with a B-Power of 400. There are also Haos, Ventus, Darkus, and Aurelus variants of his Core form. There's even a rare Diamond variant of Dragonoid Core. His B power is printed on the back of his right shoulder. His Ultra form was released in a single pack in Pyrus in wave 3 of "Battle Brawlers". A toy fair revealed that there woukd be a Diamond version of Draganoid Ultra available soon as well. 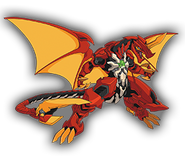 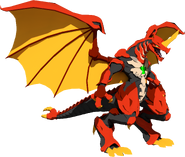