Blast From the Past

Doom Dimension Thowdown is the 43rd episode of Bakugan: Mechtanium Surge. It aired on January 7, 2012.

The episode starts on Julie's report on how people love Bakugan and Bakugan City and met Damdos again and he helped a girl get a balloon, showing his continuing kindness to humans. Meanwhile, the problem goes worse with the Brawlers in the Doom Dimension, not just on how to escape, but also Betadron and Gunz going into the Doom Dimension and challenging Dan Kuso and Drago in a battle. Betadron was still obsessed with taking down Drago for imprisning him and Gunz wants revenge on Dan because of his partner, Reptak, was now battling with Dan. Dan tries to convince Gunz that Coredegon had deceived them, but the later refuses to believe it. After an intense battle, Dan and Drago emerge victorious, and Gunz decides to put his old life behind him and start a new life with Reptak, discarding his identity as Wiseman 2.0. Betadron also joins the Brawlers. Worton then appears and informs them that Mechtavius Destroyer must be stopped before it's too late. Just then, Mechtavius Destroyer goes into Bakugan City and destroys it, killing all of its inhabitants instantly. Nothing is left behind but a crater, and Worton senses it. 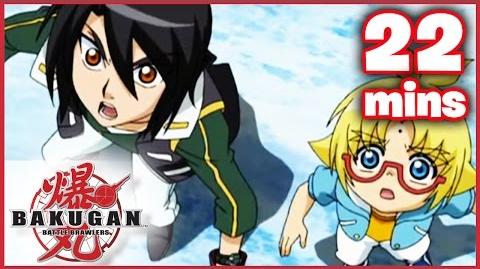