Destiny Revealed (Japanese version: The Last Warrior (最後の戦士, Saigo no senshi?)) is the 39th and last episode of Bakugan: Gundalian Invaders. It aired on the January 29, 2011 in United States and in January 22, 2012 in Japan.

Code Eve explains that she brought Dan, Barodius, Phantom Dharak, and Blitz Dragonoid between dimensions because of the story of Genesis Dragonoid (the original Dragonoid) and Dharaknoid.

In the beginning, Dragonoid and Dharaknoid were created. However, due to the massive amount of energy created from the two, they split the dimension they were created in into two halves. In Dragonoid's half formed Vestroia, while Dharaknoid's half formed a planet that further split into Neathia and Gundalia. Therefore, Code Eve transported them to a middle dimension for their final battle to prevent them from harming any more innocents. They then battle in an arena created by Code Eve to determine who will inherit the Sacred Orb's power and rule the Bakugan. Drago struggles against Dharak, is knocked out, and reverts to a primal state. Just when all hope seemed lost, Dan eventually manages to snap him out of it and they continue.

Meanwhile, Ren and Linehalt awaken after being defeated by Dharak, and Linehalt is upset at the devastation. With that he begins to understand what the Forbidden Power is for and uses it to release an energy that heals all of Neathia, waking up everyone and everything that was knocked out.

Nurzak, Ren and the rest of his team create a formal alliance with the Neathians and leave to form a new government on Gundalia, leaving Rubanoid to Linus Claude as a Castle Knight Bakugan. Dan, Drago, Shun, Marucho, and a sad Jake return to Earth and say goodbye to the Neathians as well as Fabia, Hawktor, Akwimos, and Coredem (who must stay on Neathia, Jake cries hysterically because he doesn't want to separate from him).

The four Brawlers return to Earth and are greeted by Julie and Miyoko Kuso. Later, they return to Bakugan Interspace, where everything has returned to normal and Dan ends up battling Koji. 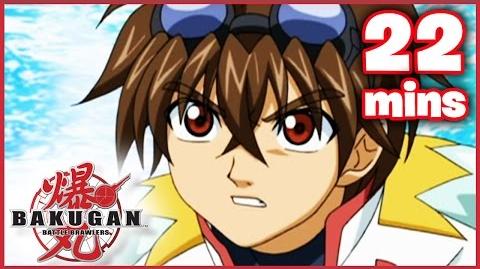