Decoy Unit is the 15th episode of Bakugan: Gundalian Invaders. It aired on August 29, 2010.

With only one shield left defending Neathia, it looks like Gundalia may actually win this war. However, Marucho Marukura devises a plan to distract the oncoming Gundalian attack consisting of Airzel, Kazarina and Stoica, while a small unit consisting of Shun Kazami, Dan Kuso and Fabia Sheen with their Bakugan head to the second shield generator to restart it. Marucho and his friend Jake Vallory act as the decoys, while Fabia and the rest goes to the generator. When the tag battle gets too intense, Marucho and Akwimos actives an ability trapping Strikeflier and Avior in ice, ended the battle and running of with Jake, while Dan, Shun and Princess Fabia get closer to the generator.

'Airzel then sends out his Battle Gear: Battle Turbine and equips it to Strikeflier. (Strikeflier: 700 - 800 Gs)

Note: Akwimos and Coredem's Power Level are considered combined but it was no shown in the anime this so look at Life Force.

Airzel & Mason win this round

Marucho activates the ability Elemental Blue to make the match ends without an outcome. 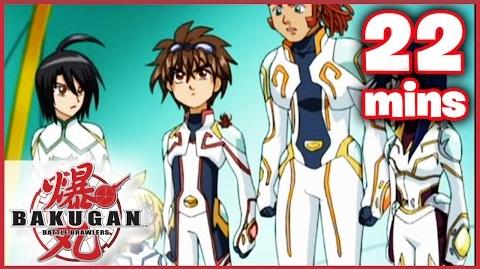