Dark Moon is the 25th episode of Bakugan: Mechtanium Surge. It aired on August 7, 2011.

With Razenoid's transformation complete, Mag Mel decides to put all the humans into the dark reverse dimension of Earth to torture them. Meanwhile, the Dark Moon sends out energy waves, which transfer all the non battlers to the reverse dimension. He also summons five different attributed Razen Titans to the five biggest cities on Earth to drill holes into the Earth's core which will result in the Earth blowing up. He then appears in the sky as a vision to all that he will do the same to all opposing forces including Gundalia, Neathia, Vestal and New Vestroia. The Brawlers joined by Team Anubias and Sellon decide to split up and hunt down the Mechtogan Titans but this proves not to be simple as there are armies of Chaos Bakugan and Dreadeon Clones as protectors. The battle begins with the Brawlers summoning their Mechtogan, Dan and Drago with the addition of Rapilator defeat the first one, and Shun summons Faser Titan to defeat another one. As the battle continues Rafe and Paige are having difficulty but then, the Vestal Destroyer arrives with Spectra Phantom, Infinity Helios, and Gus Grav on the bridge. He then comes to assist them and they defeat another Razen Titan. After this, he with Dan and Shun then come together to face three more Razen Titans.

Spectra then suggests another mutation among Helios, Drago and Taylean. They accept this and form Mercury Dragonoid, Mutant Helios, and Mutant Taylean. They then defeat many Chaos Bakugan and they merge back to their original forms. Then, Drago and Taylean mutate again and deal some more damage to the Razen Titans. Mag Mel retaliates by not only summoning more Razen Titans but also arrives with the evolved Razenoid too. He then binds Dan and Drago with Darkus Energy and Accelerak, Vexfist, and Swift Sweep fight back . However, Razenoid proves to be too strong and manages to survive and defeat all of the Mechtogan. Spectra tells Gus to send the data for the Bakugan Battle Suits over; Doomtronic for Helios and Blasterate for Taylean. The two manage to break Razenoid's shield and knock him back but he manages to survive and attacks everyone, including the Brawlers themselves. Mag Mel begins to taunt Dan by having Razanoid attack Infinity Trister, Wolfurio, Boulderon and the other Brawlers. Marucho forms a small plan, Taylean and Helios then attack Razenoid while Trister reminds Dan and Drago about the Gate and Key which since they have, can possibly close the Dark Moon. Razenoid then blasts Trister who gets up later as Dan and Drago fly up to the Moon after breaking free with Mag Mel and Razenoid coming from behind. The destiny of the Earth is on the hands of Dan and Drago as mentioned by Spectra. 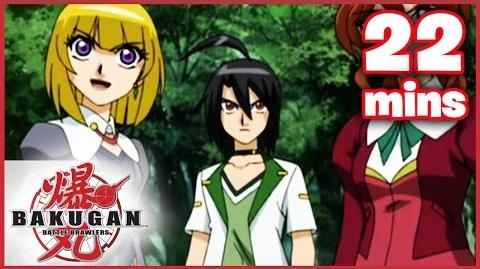