Return of a Friend

Cyber Nightmare is the 7th episode of Bakugan: New Vestroia. It aired on June 20, 2009.

After Shun successfully leads the Resistance into Alpha City, Mira departs on her own mission: searching for her older brother Keith. She heads to her home, to search for clues on her brother's computer, but comes up with nothing. After her father Professor Clay arrives, she confronts him, and he simply says that "he is no more." When she further questions him, he leaves for his lab, while Mira follows. Meanwhile, Shun takes the others to check out the control spire, and they learn that the battles that take place in the arena below the controller are synchronized with the controller's power. At the lab, Mira witnesses the birth of the first Mechanical Bakugan, Ventus Altair. As the boys make their way to her location, Mira is confronted by Lync, who is armed with the new Mechanical Bakugan known as Altair. During the battle, Mira seems to have the upper hand with Wilda and her Bakugan Trap: Baliton. That is until Lync activates two Double Abilities in a row. The scientists are worried about Altair's power fluctuation, but Professor Clay orders an increase in power and for Lync to destroy Wilda and Baliton. Before he can, the massive overload causes Altair to crash and shut down ending the battle. Professor Clay decides to use the data taken from the battle to perfect Altair into the most powerful Bakugan ever.

At this point, Altair starts to lose power due to the activation of a double ability.

At this point, Altair collapses due to so much power loss, so the brawl automatically ends. 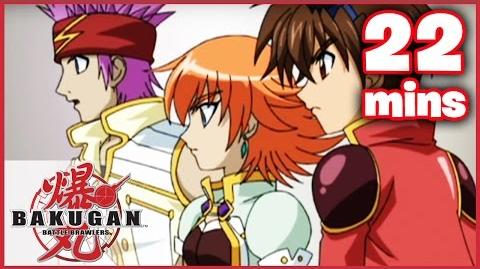