The Secret of the Orb

Curtain Call is the 18th episode of Bakugan: Gundalian Invaders. It aired on September 19, 2010.

While the Brawlers help the Neathians rebuild, Jake has an argument with Dan saying that they should keep pressing the attack on the Gundalians now that they have the advantage. When Dan and Marucho argue that they should help rebuild, Jake runs off into the forest followed by Fabia. Meanwhile, Jesse fears that he will eventually suffer the same fate as Sid and Lena and escapes from his prison to Neathia. He is eventually approached by Ren who has been sent to collect him. They eventually run into Jake and Fabia and a battle ensues. Jake and Fabia defeat the Gundalians and Jesse willingly returns to Gundalia with Ren having had one final battle. Kazarina and Stoica prepare to punish Jesse for his escape and lose to the Brawlers, while Ren attempts to spare Jesse by saying he was much a part of the battle as Jesse was. Plitheon suddenly speaks out and begs to be separated from Jesse something that surprises Jesse. However, Lumagrowl and Lythirus attack Plitheon for turning on his battle partner. Jesse forgives Plitheon saying that co-stars often have friction between them, but Plitheon insists he means what he said as he slowly fades away and Jesse is disposed of. While Kazarina and Stoica are walking through the hall, Nurzak appears and tells them that although they can trick the others of their true intentions he can see them for what they really are.

Coredem and Aranaut's Power Levels combined in the beginning of the battle. (Total: 1800 Gs)

Ren & Jesse win this round

Coredem and Aranaut's Power Levels combined in the beginning of the battle. (Total: 1800 Gs)

Fabia & Jake win this round

Ren attempts to counter by opening his Gate Card (Ring Zero) to nullify the opponent's abilites but Jake activates the ability Change Exia to flip the effect to Linehalt and Plitheon. 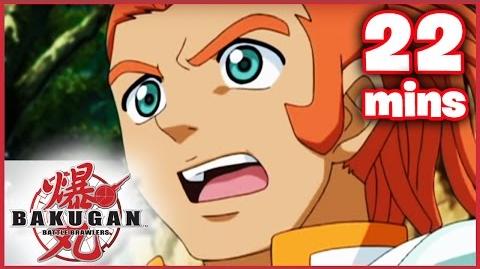