The Eve of Extermination

Countdown to Doomsday is the 36th episode of Bakugan: Mechtanium Surge. It aired on November 12th, 2011.

Wiseman finally decides to deploy the final stage of his plan, with the Nonet Bakugan more powerful after every battle, and with the stolen Battle Suits and the evil Mechtogan by their side, they are ready to face the Battle Brawlers.

Meanwhile, the Battle Brawlers are analyzing the recollected data about the Nonet Bakugan, the evil Mechtogan, the stolen Battle Suits, and Wiseman himself, but they don't have enough information, so they decide to look for information from anyone they can ask. While they do this, Wiseman and the other Nonet Bakugan are getting ready for their battle against the Brawlers, but still they are not sure of trusting the evil Mechtogan. However, their leader, Betadron, doesn't really care of entrusting the evil Mechtogan, as long as he can destroy Drago, he will take any risk.

After a long time searching, Skytruss and Orbeum locate Wiseman and alert the other Brawlers about him. When the two sides finally met, a great Bakugan battle engages using everything they got. Both sides are pushing themselves to the limit, but Wiseman and the Nonets summon the evil Mechtogan to help them destroy their enemy. The evil Mechtogan easily defeat the opposing Bakugan with a single blow, and when everything seems lost, they combine to form the deadly Mechtavius Destroyer. Seeing no choice, Dan decides to summon their ultimate battle machine, Dragonoid Destroyer, who quickly starts to battle against his "brother" with everything he has. Unfortunately, Dragonoid Destroyer isn't powerful enough to defeat Mechtavius Destroyer this time, so Mechtavius Destroyer focus all of his energy into a final blow and apparently defeats Dragonoid Destroyer, draining all his remaining energy. 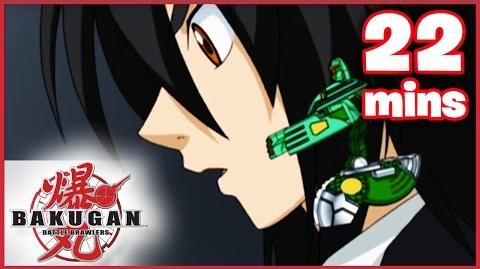