Combination Impossible is the 31st episode of Bakugan: Mechtanium Surge. It aired on October 8th, 2011.

After Shun tells his story about what happened in his battle with Wiseman, the other Bakugan pressure Radizen on who he is going to be able to combine with. Radizen has become upset because he is unable to have a combination like the others, until he is approached by Roxtor trying to cheer him up, but he ignores him. He is later taken by Marucho who tries to cheer him up, to one of his family's hydroelectric plants. While on their way to the power plant, Mira hides in the back of Marucho's air carrier to help Marucho and Raidzen patch things up. After listening she talks to Roxtor stating that she didn't have to come at all. Marucho and Raidzen are confronted by Wiseman and they battle against his Bakugan Worton and Balista, Radizen is able to hold his own and beat the two, but when they combine into Volkaos he has a hard time. Radizen then fuses with Roxtor and is able to defeat them in battle. 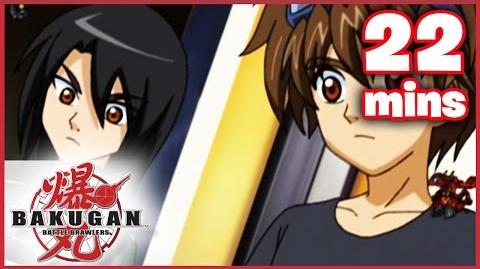