Code Eve is the 38th episode of Bakugan: Gundalian Invaders. It aired on January 22, 2011.

After defeating Lumagrowl, Fabia, Mason, and Nurzak head to Nurzak's ship, in order to return to Neathia. But, Gill is intent on stopping them from returning. Luckily, Fabia and Mason hold him off long enough for Nurzak to start up his ship, and the three of them return to Neathia with Gill in hot pursuit. Back in Neathia, with the Castle Knights wiped out by Phantom Dharak, the Brawlers were the only ones left to fend off the remaining Gundalain Bakugan. When Captain Elright gets defeated by Dharak, Fabia arrives just in time with Aranaut, defeating more Gundalian Bakugan in the way. Meanwhile, the Agents are happy to see Nurzak and Mason Brown alive, with the former telling to continue their assault against Gundalia.

When Gill arrived in the battlefield, he claims to Emperor Barodius that Fabia had taken down Kazarina in their battle. Unbeknownst to him, Barodius had been listening to Stoica and Airzel's conversation and knows that Gill killed Kazarina so he has Dharak shoot down his ship. Airzel and Strikeflier rushes up to protect Gill and they are hit as well and the two of them along with Gil and Krakix killed. When the Brawlers launch an attack against Barodius, he separates from Dharak in order to take the Sacred Orb but is stopped by Fabia and then Nurzak. Dharak takes them both down and Nurzak fell into a chasm. Dan and Dragonoid Colossus decide to pursue Barodius to prevent him from getting to the Sacred Orb, leaving Drago and the rest of the Brawlers to fend off Dharak but the Brawlers are taken down one by one leaving only Drago remaining. Dan and Dragonoid Colossus are stopped by Stoica and Dharak. Lythirus holds down Dragonoid Colossus to prevent him from moving as Dharak readies an attack. Dragonoid Colossus then instructs Dan to jump off and prevent Barodius from reaching the Sacred Orb. He then is killed by Dharak's attack with Stoica and Lythirus also being killed in the blast.

Dharak then finishes off the remaining Brawlers with his powerful abilities. Dan follows Barodius to the throne room just in time to prevent him from killing Queen Serena and taking the Sacred Orb. But right as Dan tackles Barodius and Drago and Dharak were about to finish each other off, the Sacred Orb teleports them to the space in between dimensions for them to face off in a final battle. The four of them are greeted by Code Eve, the source of all Bakugan DNA. 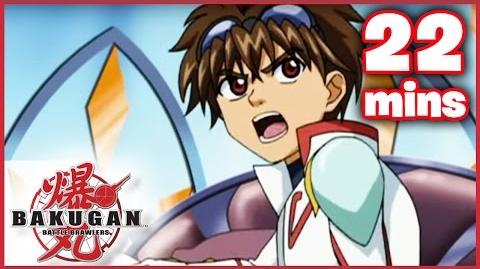