As Dan and Baron safely make it back to New Vestroia, they find their base completely empty, and with no sign of Shun, Ace or Marucho anywhere. They discover that they are near Beta City and resolve to head there believing that Shun, Ace and Marucho have gone there. Meanwhile, as Spectra makes his return, the other Vexos are shocked to see that Mira  is with him saying that she has joined the Vexos. However, in her mind, she only wants to find out what Spectra is really up to. Also, she discovers that three Brawlers have been captured and are being held hostage and she tries to release them. Dan and Baron sneak into Beta City and battle Mylene and Shadow. Meanwhile, Mira is interrupted by Spectra who helps her release her friends, but he tells her that she owes him a debt. As the battle wages on, Baron is defeated defending Drago, who taps into the power of the Perfect Core, defeating Mylene and Shadow easily as well as destroying the dimension controller. Ace , Shun and Marucho reunite with Beta City, Baron and they make their leave from Beta City. Later, Mylene accuses Spectra of her loss and the escape of the prisoners, but Gus reminds her that she lost the battle, not him. Mira is still left wondering what Spectra is up to.

Baron activates Shade Cocoon to prevent his opponent from activating any more abilities.

Both Hades and Elico get wiped out by Drago's attack.

Dan and Baron win this round.

Most of the round is skipped.

Rest of this round is not shown until Hades is recharged and ready to go with another Saurer Cannon (Hades: 1100 - 2000 Gs).

Winning team is Dan and Baron. 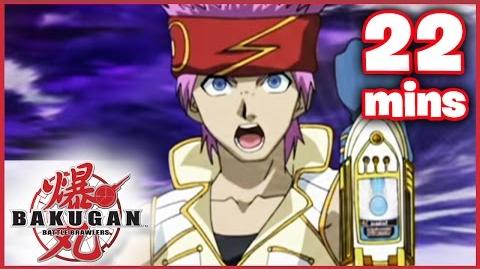 Retrieved from "https://bakugan.fandom.com/wiki/Beta_City_Blues?oldid=762222"
Community content is available under CC-BY-SA unless otherwise noted.