Behind the Mask is the 23rd episode of Bakugan: Mechtanium Surge. It aired on July 24th, 2011.

Still stuck in Bakugan Interspace, Dan and the other Brawlers are fighting off the Chaos Bakugan. Dan then has a vision that shows Mag Mel's desire to attack Earth, using Bakugan Interspace as a base for his operations. He tells the other Brawlers about this vision and suggests using his link to find and attack him. The others, however, disagree because of the many risks, including becoming comatose. He still takes this risk and goes ahead with the others defending, while Marucho tries to find a way out.

In another area, Soon and Chris have lost confidence since Sellon's departure, with Soon more upset. They are then attacked by a Flash Ingram, but are saved by Noah and his Subterra Ziperator. Chris is surprised to see that he has become more confident, and although Soon says that they don't want his help, calling him a cowardly crybaby, Noah continues helping them. More Chaos Bakugan come, but the rest of Noah's team, Ben, Jack and Robin, arrive on Pyrus, Aquos and Ventus Ziperators, respectively. Soon doesn't believe that they have anything to fight for, after the people they trusted betrayed them, but Ben reassures her and the two girls run to the Battle Brawlers base. As Dan tries to clear his mind and look for Mag Mel, he finds him in a "flip-side" of Bakugan Interspace. The two begin to battle, summoning their Mechtogan and the two summon blades to fight each other.

Outside the base, the two girls are attacked again, with Soon wanting to be killed, but the Brawlers step in and fight. As more spawn from the ground, Noah and the others come to help. Rafe tells them that their main priority is to protect Dan, who is no longer conscious, and the two girls regain their confidence and join the fight.

Back in the control room, Marucho still can't find a way out or to contact the outside world, but Dylan appears and says no human can do it. With that, Marucho realizes that as an AI, Dylan could do it. Shun helped Soon and Chris regain their passion for brawling, as his battling style reminded them of Sellon's ability and grace, and they used their own Bakugan to help defeat the Chaos Bakugan.

In the flip world, Dan continues to fight and manages to crack Mag Mel's mask, revealing Barodius. Barodius reveals that despite being banished by Code Eve, he still had a link with Dan. He managed to achieve enough power to break free of the shackles from Code Eve. Razenoid says he was once Dharak. They continue to fight and summon their Mechtogan Titans. After an explosion, Dan wakes up with the Brawlers and the others in front of him. He tells them where he is and who Mag Mel is leaving all of them shocked. Meanwhile, Marucho works on Interspace and gets Dylan to do the final job, revealing that his lollipop is a key. Marucho manages to get contact with Kato and his dad and he reveals his plan to his dad. 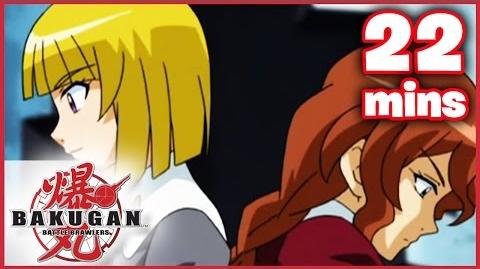