Battle For the Second Shield is the 17th episode of Bakugan: Gundalian Invaders. It aired on September 12, 2010.

Shun successfully sneaks past the Gundalian guards into the second shield generator, but is ambushed by Lena and Kazarina. A battle quickly ensues and Lena is taken out. When Kazarina and Lumagrowl begin giving Shun too much trouble, Dan and Hawktor suddenly arrive to save the day! Dan and Shun switch back their Bakugan and Shun heads to the generator while Dan holds off Kazarina. Shun reactivates the shield as Drago powers it up with the Element. Realizing what is happening, Airzel, Stoica and Kazarina quickly flee before being trapped within the shield. As the brawlers celebrate their victory, all is not well on Gundalia. Kazarina knows she will be punished by Barodius for the failure, so she plans to use Lena as her scapegoat. Lena, however, is fully aware of this thanks to Gill, and attempts to get Phosphos to assassinate Kazarina before it can happen. Unfortunately for her, Kazarina is well prepared as Phosphos is taken out by Lumagrowl while Kazarina disposes of Lena. Kazarina successfully evades punishment and hints to Gill that she knew of his assistance to Lena, while Ren overhears and mourns over Lena's fate.

Dan & Shun win this round

Note: Shun leaves the battle to activate the second shield, leaving the battle with Dan vs Kazarina.

Dan sends out his Battle Gear: Explosix Gear (mistakenly called as Cross Buster, its Japanese name) and equips it to Drago. (Drago: 900 - 1000 Gs) 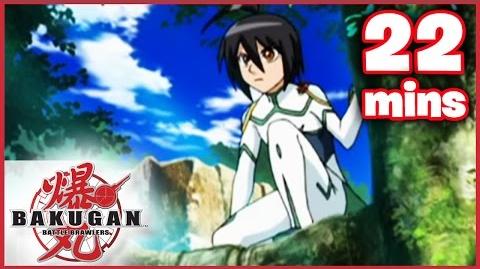