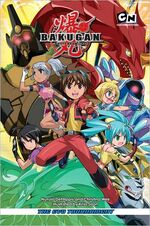 Bakugan: The Evo Tournament is a manga that was released on March 2, 2010. It is written by Nunzio DeFilippis and Christina Weir and illustrated by Kriss Sison.

Bakugan is more than a game: The fate of two worlds rests on the outcome! Dan and Drago decide to enter the mysterious Evo Tournament to become even more powerful. But what's the secret of the rare Bakugan who is reigning champ? And what happens when Runo enters the tournament, intent on stopping them? Is winning the championship worth the price?

The story takes place between episode 18 and episode 19 of Bakugan Battle Brawlers while Dan attempts to get Drago to evolve in order to stop Masquerade and Hydranoid.

Marucho, while browsing the internet and chatting with other people, gets word of the secretive Evo Tournament. Dan and Drago think this is the perfect way for an evolution, but Runo gets suspicious of the current champion. In the Evo Tournament, players each bet a set amount of Gs each round. The winner get his/her Gs back while the loser's Gs go into a pot. The champion of the Tournament will be given all the Gs that were previously lost.

However, people competing in these tournaments start losing their memory of Bakugan, including Dan, Shun and Julie. The Bakugan competing in these tournaments also lose memory plus their ability to speak. In the end, Dan and Runo face the champion Katie Lowery and her Mecha Chamelia, two on one. During that battle they found out that it has been Mecha Chamelia that has been erasing people's memories.

Retrieved from "https://bakugan.fandom.com/wiki/Bakugan:_The_Evo_Tournament?oldid=675659"
Community content is available under CC-BY-SA unless otherwise noted.