Bakugan Battle Planet (爆丸バトルプラネット, Bakugan Batoru Puranetto?)) is the name of the first season of the Bakugan reboot.

The season follows the adventures of Dan Kouzo and his best friends, the first kids on Earth to bond with the mysterious alien creatures known as the Bakugan. The storyline revolves around friendship, battling, and competition.

Like the original series, Bakugan Battle Planet has an integrated toy line featuring physical toys, marble-like balls that transform into collectible characters once rolled over a magnetic card. Along with the physical game, mobile app and online integration are also in the works.

The toy line was released in North America and other select markets in January 2019, with a full global roll-out in the second quarter.

During Spin Master's Q4 2017 financial results conference call, more details about the reboot were discussed. The episodes will be two eleven-minute programs rather than the traditional 22-minute format. The possibility of a movie is also in discussion. For the toy line, Spin Master mentioned "advanced innovation" being brought to the toys and confirmed that it would be a global release.[4] A second trademark was filed on March 29, 2018, depicting a proper logo.[5]

In its Q2 2018 financial results conference call, Spin Master set a tentative release date for the show and its toy line for Spring 2019.[6] In October, the show was pushed forward to a December 2018 release.[7] A few days later Bakugan: Battle Planet was confirmed to consist of 100 11-minute episodes which also can be marketed as 50 22-minute episodes.[8]

On October 15, some voice actors for the series and character names were revealed via Twitter; Dan Kouzo would be voiced by Jonah Wineberg, Shun by Ticoon Kim, and Wynton Styles by Deven Mack.[9][10] 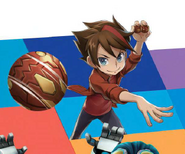 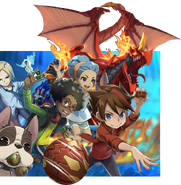