Auxillataur is one of Ajit’s golden Bakugan Partners. Like many Aurelus Bakugan, Auxillataur is strong and stoic. In both day-to-day life and in battle, he always carries himself with an air of nobility and royalty.

Much like his appearance, Auxillataur carries a strong and noble demeanor. Whether in or out of battle, he is a self-justified and composed warrior. As Drago pointed out, Auxillataur has unimaginable power befitting his stature. Being Ajit's partner, he is loyal to him, and will do as he asks, even if it means withdrawing from battle.

He made his first appearance in closed ball form in "Awesome Brawlers Training Camp Part 1".

In "Awesome Brawlers Training Camp Part 2", he was awoken from his slumber due to the battle energy Ajit and the Awesome Brawlers gave off. When Auxillataur awoken, Ajit withdrew Pharoah and unleashed Auxillataur into battle against Drago, Cydneous, and Gillator, defeating the latter Bakugan in one hit and badly damaging Drago. Though Drago countered, Auxillataur overpowered him and won.

He appeared once again in "Riot vs. Ajit", where he was used alongside Pharol against Riot. Though Maxotaur and Barbetra were using tricks, Auxillataur defended them, then pushed them back all by himself. Due to his overwhelming might and thought of the battle ending too quickly, Ajit asked Auxillataur to withdraw for the duration of the battle onwards. He complied, thus leaving Pharol to defeat Maxotaur and Barbetra single-handedly. 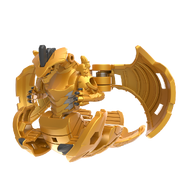