As Dan and the Brawlers continue their search for the Bakugan Termination System, they run into an ambush, by the Palace Guards. The Brawlers (minus Dan and Mira) are forced to separate, and wind up engaging in their own battles with the Vexos. Unbeknownst to them, the Vexos have rigged it so that it is impossible for them to lose when fighting with Mechanical Bakugan inside the Palace. In the end, the Vexos take the Ventus and Darkus Attribute Energies, (in the brawls between Shun and Baron against Mylene and Volt, and Marucho and Ace versus Lync and Shadow) leaving only the Pyrus to be collected in order for the BT System to be fully operational. As Dan and Mira stumble upon Hydron, the rest of the Brawlers race around trying to find them in order to warn them about the trap set by Zenoheld and the Vexos. Finally, Spectra presents a proposition of the Phantom Data to Dr. Clay. 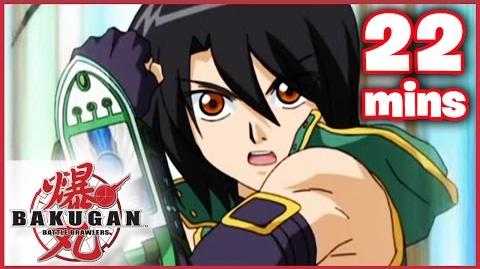