With Keith having gone to the Vexos Motherpalace, and having no way to find the palace, the Resistance is stuck. Luckily, Alice Gehabich, and her grandfather Dr. Michael arrive, and use the teleportation signature left behind by Shadow Prove and Mylene Farrow, to trace the co-ordinates of the palace. Meanwhile, King Zenoheld continues his attack, forcing Spectra Phantom and Gus Grav to retreat, and come up with a counterattack. The Resistance are saddened to hear that Blade Tigrerra and Hammer Gorem do not wish to participate on the assault of the palace due to the fact that they know their limitations (which are lower than the rest of the team) and it would irresponsibly put Runo Misaki and Julie Makimoto in danger. All of a sudden Dr. Michael locks onto the palace's coordinates and the Resistance (minus Runo, Julie and Alice) head for the battle and arrive just in time to see Helios and Vulcan in trouble. However, the Alternative is far more powerful than any of them could have ever imagined, (because despite the amount of damage they did which was a pretty decent amount the Alternative still repaired itself with Farbros). Eventually, Hylash, who is being ridden by Ingram, is fatally blasted by one of the Alternative's Fortresses, leaving Shun at a disadvantage. Keith realizes that because Professor Clay built the Alternative then he must be inside and asks Mira if she wants to confront him, which she does. Then he uses a new Battle Gear, Zukanator on Helios in hopes that it will even out the playing field. Keith blows a hole in the Alternative and the siblings go inside the machine. 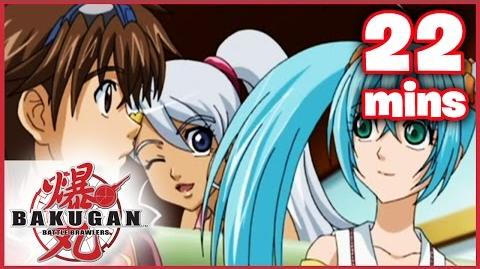