All Or Nothing is the 38th episode of Bakugan: New Vestroia. It aired on February 6, 2010.

No longer able to hide from the Vexos, the Brawlers realize they must now go on the offensive. They plan to storm the Mother Palace, and directly attack the Bakugan Termination System, instead of protecting the Attribute Energies. But without a working Dimensional Transporter, or the coordinates to the Mother Palace, it at first seems there would be no way out for the Brawlers. But Dan quickly realizes that they can find the location of the Mother Palace by convincing Spectra to help them. The Brawlers are hesitant, as Spectra will not likely be cooperative and they have no way to contact him. Mira adds that there would be no way Spectra would trust any of them. Meanwhile, the Vexos discover that someone has opened a portal to Earth, from an entirely different universe. As Spectra makes his way to Earth, Dan and Drago admit how similar they are in both brawling abilities and lifestyles. When Runo interrupts the two for dinner, Dan and Drago are suddenly transported to Spectra's ship now that the former Vexos had broken through to Earth. Once there, Dan learns that Spectra needs the Perfect Core from Drago to make Helios the Ultimate Bakugan. They strike a deal: if Dan wins, Spectra will take the Resistance to the Mother Palace, but if Spectra wins, Dan must willingly surrender the Perfect Core to him. During the battle, Spectra realizes that the only way Helios can defeat Drago is by using his natural abilities and powerful will to survive and evolve. Eventually, Spectra's doubt in himself and his previous methods to perfect Helios leads to his defeat. Dan wins the fight, and Spectra agrees to the terms of the bet. Everyone except Runo, Julie and Billy are transported to Spectra's ship, since he states that he would only allow the Brawlers and Bakugan initially bestowed with the Bakugan Attribute Energies to go with him as Gus prepares the ship for the transport, Spectra thanks Dan for enlightening him and refers to him as my friend. Feeling humiliated after his defeat, Helios begs Spectra to make him even stronger. Spectra agrees, saying he will use the data he received on Bakugan evolution from an anonymous source to bring out new abilities from inside the Bakugan. 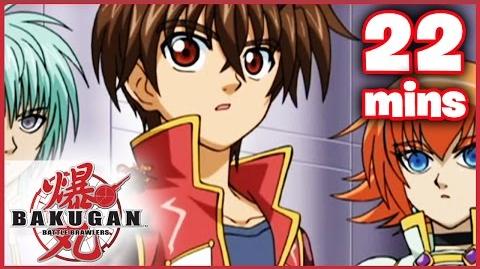