He tends to forget names, especially China Riot. He likes to play pranks like Wynton Styles but not much. However as a phantom thief or when up against Haavik and his team, he shown to be quite serious. Overall, he is quite a friendly and a nice person.

Not known much about his past, but it seems he has no family at first. He ran away from orphanage and a dog appeared and about to attack him. Calloway Storm appeared and he threw a glowing rose to scare that dog away. Therefore, Storm took Ajit in and teach him the ways of a Phantom Thief.

While doing one of storms mission, Ajit somehow come across a Maze Gate and walk through it. There he wandered into one of the temple in the Maze and found Pharol and Auxillataur. Although he didn't know anything about Bakugan, he still kept them as they are golden bakugan. Suddenly, Tiko appeared and was about to attack him. That's when Pharol and Auxillataur come out and stop Tiko. Ajit was then transported back to the surface holding the bakugan and founded by Storm, which he then allow Ajit to keep them.

After Tiko was defeated, Pharol rolled out for the first time and introduce himself to Ajit. The two of them became partners and then set out to meet the Awesome Brawlers. Both of them appeared in the middle of the battle between Dan Kouzo and China Riot, where Pharol defeated Maxotaur with a single attack. Ajit and Pharol was forced to retreat when Benton Dusk's security team and the Awesome Brawlers are after them. Dan and Ajit had a battle in the end, with Dan being victorious using Drago's Baku-Gear.

Ajit set out to form Storm's signature mark, where he was later confronted by Magnus Black. Pharol went invisible and was able to battle Nillious at ease, until Magnus was able to blow the cover off. Ajit admitted he lost and handed Magnus a light bulb. He then visits the Awesome Brawlers and decides to hangout with them. Ajit was forced to enter the Bakugan Battle League. Dan and Ajit Battled once more, with Ajit being victorious using Auxillator. When the battle league started, Ajit made it to the finals facing Dan for the third time, with Dan being victorious. However, Storm appeared and stole everyone else's Bakugan. Dan and Ajit were able to defeat Storm with Ajit betraying Storm in order to be a better person and joined the Awesome Brawlers as a new member. As Revenge, Storm exposed him by showing images of him as a phantom thief in the battle league and Ajit disappeared.

Ajit decides to go into Storm's hideout in order to return the treasure that has been stolen to it's rightful owners. Dan somehow followed him and accidentally activated a trap. Ajit later on sends Dan away in order to get the stolen treasures alone and head to every place where the items that had been stolen to return them. Once its done, he was confronted by Storm. Ajit was in the brink of defeat until Dan and the rest showed up. He was victorious in the end and was later took in by Kravitz to have a normal life. 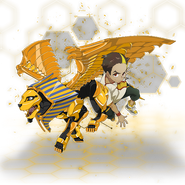 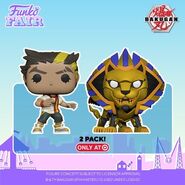