A Hero Returns is the 16th episode of Bakugan: Mechtanium Surge. It aired on June 5, 2011.

Dan finally returns to Bakugan Interspace to help the Battle Brawlers in their battle against the Chaos Bakugan with his friends and Drago battles Anubias's Horridian, Bolcanon, Krakenoid, Sellon's Krowll, Spyron, and Vertexx, while he is able to weaken them in the progress. While Drago is battling, Spectra Phantom and Infinity Helios are impressed with Drago's new power. Rafe and Paige, on the other hand, are scared of Drago's immense power. Zenthon and Drago start defeating a whole bunch of Chaos Bakugan but then, Dan suddenly has a vision of Mag Mel which causes Dan and Drago to go out of sync and they are unable to control Zenthon and he starts attacking Bakugan Interspace. Zenthon also defeats Trister, Wolfurio, Boulderon, Helios, and Taylean in one blow and they all turn back into their ball form. Zenthon disappears and Anubias summons BakuNano Aeroblaze, BakuNano Hyper Pulsor, BakuNano Daftorix, BakuNano Slicerix, BakuNano Jamsaber, and BakuNano Orehammer to take down Drago.

Drago is then defeated by all of them due to being a six on one fight. Dan tries to throw Drago back into battle, but Marucho stops him and sends the Brawlers into a meeting room outside of Interspace's main area. Marucho then deletes Area B and all of the Chaos Bakugan are deleted. Keith is disappointed in Dan's attitude, believing him to be a completely different person than the one who brought him out of his darkness. Believing the Brawlers to be splintered, Keith leaves in disappointment. Meanwhile, Shun believes that Dan has no right to boss them around again due to him leaving. Dan then tells them he went to train at New Vestroia and they were all shocked. Dan also says all their training paid off but Paige and Rafe don't believe them because they weren't able to control Mechtogan Zenthon. Drago then tells Dan they should tell them the truth and he does. He tells the Brawlers about the connection he has with Mag Mel and Razenoid and they will have to decide if they should take him in again after he abandoned them. Rafe and Paige seem to be disappointed about Dan's attitude towards Marucho, who had become the unofficial leader of the Brawlers recently (succeeding Shun, who had declared himself the leader in Dan's absence). Dan later leaves after Marucho yells at him and Shun also leaves in frustration.

Meanwhile, because of the energy Zenthon unleashed after Dan's return, Mag Mel and Razenoid finally have enough power to break free. They destroy their chains and a castle comes out of the ground on Gundalia. Razenoid also spawns thousands of Chaos Bakugan and Mag Mel then commands his Chaos Bakugan to attack the planet. Dan has a vision of the Chaos Army attacking Gundalia and rushes to Interspace to inform the others.

The Brawlers believe that Dan is only dreaming until Paige receives a message from a Gundalian, telling her that the entire planet is swarmed with Chaos Bakugan. Paige then says that she has to go to save her people but Marucho says that the Brawlers and himself will come too. Dan offers to go with them to Gundalia, but she and the Brawlers say no; however, Dan feels obligated to go because he's the original brawler and, as such, this fight involves him too. 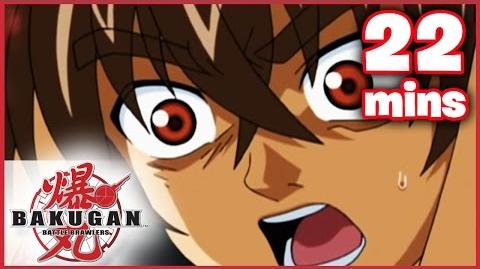