A Fish Called Tayghen is the 41st episode of Bakugan Battle Brawlers. It aired on June 15, 2008.

After jumping into the dimensional rift found in the middle of an ocean, the Brawlers arrive in a Ventus/Aquos world. They realize Vestroia has become a hybrid world, because of the merged attributes. While trying to make their way to the core of Vestroia, they encounter Aquos/Ventus hybrids: Taygen and Hairadee. Shun and Marucho step up to fight them while Dan and the others enter the gate to the Subterra/Haos world. Shun and Marucho find the hybrid Bakugan difficult to defeat due to the combination of the attributes, but succeed in defeating them in the end. What type of Bakugan will Dan and friends encounter in their journey to stop Naga...? 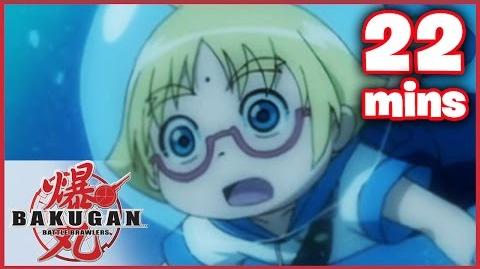 Retrieved from "https://bakugan.fandom.com/wiki/A_Fish_Called_Tayghen?oldid=762191"
Community content is available under CC-BY-SA unless otherwise noted.