A Feud Between Friends

Masquerade meets a young Bakugan player named Rikimaru and offers him a special Bakugan, Aquos Siege. Across town, Dan begins training for his rematch against Masquerade. Drago is still unsure of Dan's motives but decides to team up with him, in the hopes that he can help rescue Vestroia, the home of all Bakugan. Dan runs into Rikimaru, and they brawl. On the verge of winning with Rikimaru, Drago decides to ignore Dan's orders knowing that they could prove fatal. Drago uses a dangerous technique to risk himself and win the battle. Angry, Dan curses the day he ever met Drago and throws him into the river.

Third Battle at the Park

Most of this brawl happens off-screen. This is what appears as the brawl unfolds:

Rikimaru wins this round.

The winner is Rikimaru.

Dan and Drago battle and defeat Shuji, who uses a Haos Mantris this time around.

Dan and Rikimaru both activate the Bakugan field as reality slows to a halt.

Rikimaru sets his Doom Card onto the field.

Dan and Rikimaru both throw out their Gate Cards against each other.

Rikimaru activates Tsunami Wave. Robotallion, Juggernoid, Falconeer, and Griffon are all wiped out by Siege's wave attack and are sent to the Doom Dimension.

Rikimaru wins this round.

Sensing a trap, Drago releases himself from his own Boosted Dragon Ability. (Siege: 350 Gs - Drago: 340 Gs)

The winner is Dan Kuso.

Note: All characters are listed in order of their first appearances in the episode. The time they appear is the time from the Japanese dub.

English
Add a photo to this gallery

Rikimaru and Aquos Juggernoid
Add a photo to this gallery

Note: This section should only contain full episode uploads made by the right holders. We do not wish to endorse any unauthorized uploads of full episodes on this wiki, as it would violate FANDOM's Terms of Use and further laws against piracy. 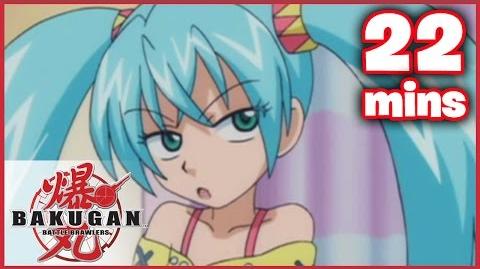 Bakugan Battle Brawlers A Feud between Friends Ep. 3
Add a photo to this gallery

Retrieved from "https://bakugan.fandom.com/wiki/A_Feud_Between_Friends?oldid=762153"
Community content is available under CC-BY-SA unless otherwise noted.